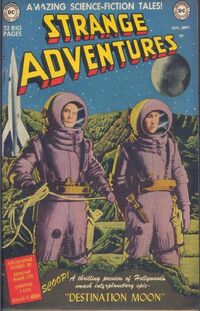 Like its sister title, Mystery in Space, Strange Adventures was scheduled for a relaunch in 1978, but the plans were cancelled due to the DC Implosion. A year later, the relaunch went forward as a new title, Time Warp.

Retrieved from "https://dc.fandom.com/wiki/Strange_Adventures_Vol_1?oldid=2828381"
Community content is available under CC-BY-SA unless otherwise noted.