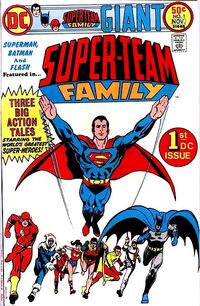 Super-Team Family was an ongoing series published by DC Comics from November of 1975 until April of 1978, spanning a total of fifteen issues. This omnibus series had a higher page count than standard titles. It reprinted stories of superhero teams and superhero team-ups from Golden Age and Silver Age DC Comics titles. Issues #1 and 4-7 were entirely reprints; issues #2, 3, and 8-10 contained reprints and one new story per issue; issues # 11-15 were entirely new.

Retrieved from "https://dc.fandom.com/wiki/Super-Team_Family_Vol_1?oldid=2020044"
Community content is available under CC-BY-SA unless otherwise noted.