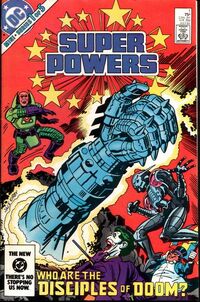 Super Powers was intended to be "continuity free" and does not fit into the canon of Earth-One, the mainstream DC universe of the time. The Crisis on Infinite Earths: The Compendium formally put Super Powers v1, v2, v3 + Super Powers Collection as all happening on Earth-Thirty-Two.

The DC Comics Database is indexing this series as part of the Super Friends continuity. For more information on that decision, see the Talk page.

Retrieved from "https://dc.fandom.com/wiki/Super_Powers_Vol_1?oldid=1884719"
Community content is available under CC-BY-SA unless otherwise noted.