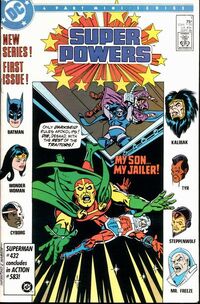 Super Powers was intended to be "continuity free" and does not fit into the canon of Earth-One, the mainstream DC universe of the time. The Crisis on Infinite Earths: The Compendium formally put Super Powers v1, v2, v3 + Super Powers Collection as all happening on Earth-Thirty-Two.

The DC Comics Database is indexing this series as part of the Super Friends continuity. For more information on that decision, see the Talk page for the first volume

Retrieved from "https://dc.fandom.com/wiki/Super_Powers_Vol_3?oldid=2192839"
Community content is available under CC-BY-SA unless otherwise noted.