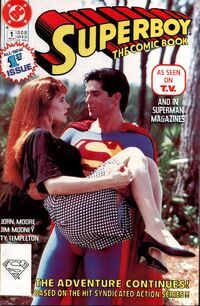 Superboy (Volume 3) was published from February of 1990 until June of 1991. This series took place outside of modern continuity and was based on the 1988 Superboy live-action television series. With issue #11, the title officially changed to the Adventures of Superboy until its cancellation with issue #22. Classified as Earth-988 in the Crisis on Infinite Earths: The Compendium

Retrieved from "https://dc.fandom.com/wiki/Superboy_Vol_3?oldid=2243212"
Community content is available under CC-BY-SA unless otherwise noted.