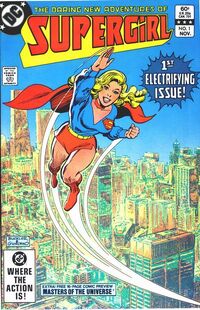 Supergirl (Volume 2) was published from November of 1982 until September of 1984, spanning a total of 23 issues. The series was initially entitled, the Daring New Adventures of Supergirl, but shortened the title to simply, Supergirl, with issue #13. This was the last regular comic series to feature the Pre-Crisis Kara Zor-El as Supergirl.

Fomerly her adventures had been published in Action Comics Vol 1, Adventure Comics Vol 1, Supergirl Vol 1 and Superman Family Vol 1. DC planned to launch a new magazine called DC Double Comics featuring Supergirl and Superboy, but it didn't come to pass. So, when Supergirl (Volume 2) was cancelled, there wasn't a Supergirl monthly strip on the stands for the first time since 1959.

In these tales, Supergirl relocates from New York City to Chicago, meets new friends and allies... and new enemies, such like Psi, The Gang, Reactron or Blackstarr! Plus, while battling the evil foursome known as the Gang, Kara stumbles upon a conspiracy that threatens all of her new hometown and leads her to ally herself with the Doom Patrol.

Retrieved from "https://dc.fandom.com/wiki/Supergirl_Vol_2?oldid=2559133"
Community content is available under CC-BY-SA unless otherwise noted.