"New Krypton (Part V of X) – The Secret Origin of Supergirl": Sam Lane and Codename: Assassin watch the movements of Kryptonians across America as conspiring to build a defense against possible Kryptonian aggression.

Have a life... I can't do both, can I? You want me here. I have a life in Metropolis. Well, the start of one, anyway. I want to make our family work, I do. But which home should I pick?

Sam Lane and Codename: Assassin watch the movements of Kryptonians across America as conspiring to build a defense against possible Kryptonian aggression.

Meanwhile, Zor-El and Alura visit their daughter Kara's apartment and have an argument with her. Alura is of the opinion that humans hate them and Kara must abandon her "Linda Lang" secret identity and return to Kandor with them because it's too dangerous for her to stay out of the city. Kara argues she's trying to build herself a new life and is miffed because she thought her parents wanted to see her instead of dragging her out of her new home. Alura stalks off and Zor-El and Kara have a heart-to-heart talk. Kara talks about her scrambled and faulty memories, her sudden mood swings, her weird past behaviour and her crystallized blood. Zor-El determines that his daughter suffers from Kryptonite poisoning.

In the Daily Planet, Catherine Grant is writing up another piece of slander to ruin Supergirl's reputation as an angry Lana Lang is powerless to stop her. And in Project 7734's headquarters, Sam Lane visits Benjamin Krull, aka, Reactron, who agrees to undergo a new procedure.

Back on New Krypton, Kara's parents are putting her into a regenerative chamber which will drain off the remaining radiation. Kara protests that she's feeling fine now and she's worried that the chamber can't contain the energy drained from her body. Her parents reply she needs to be fully cured and they are willing to run every risk for her.

The procedure begins. The energy drain hurts Kara but she at last regains her memories: she remembers how Argo City was saved thanks to her parents building a dome using Brainiac tech. Zor-El began to build space pods to evacuate his family just in case as he tried to talk the Argonian council into building a fleet. Zor-El was ignored, much like his brother, but ironically he ignored his daughter when Kara pointed out that depending on a Brainiac's drone of all things to continue surviving was not a good idea.

Shortly after Brainiac tracked down his drone and invaded Argo City. Fortunately, Zor-El had managed to get a rocket done. Zor held a drone at bay as Alura shoved her daughter into the pod, asked her to take care of her cousin and blasted her off into space. Unfortunately Kara's space pod streaked through a Kryptonite asteroid field. Chunks of Green Kryptonite stuck onto the hull and the ship got knocked off course. The ship's A. I. put Kara in suspended animation as it plotted a new course and the rocket's solar panels kept Kara alive until she crash-landed three decades later.

Kara stands up, her memories now whole. Alura reiterates that they sent her to Earth to save her life, so she doesn't want her daughter to stay in a city where she is hated. Yet still Kara has a life and a family in Metropolis and doesn't want to leave them either. She needs some time before making a choice. 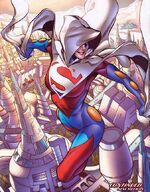 Elsewhere in Kandor, a woman is watching a Metropolis news report regarding the Kryptonian newcomers. She dons a mask and a costume and takes to the skies, ready to introduce herself to the world.