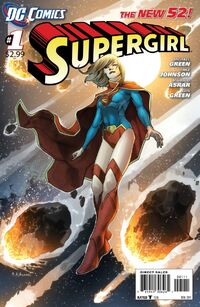 Supergirl (Volume 6) was one of the comic titles in the first wave of The New 52 ongoing series to be published after Flashpoint. It was published from November of 2011 until May of 2015, spanning a total of forty issues and two specials. It featured a new iteration of Supergirl, Kara Zor-El of Prime Earth.

After spending several decades in suspended animation as her spacecraft orbited the Sun, Kara Zor-El lands on Siberia. Upon awakening, the Last Daughter of Krypton finds out her family and her world are gone and she has been stranded in an alien world, full of hostile people who use primitive technology and talk strange languages. Alone, confused and still grieving, Kara will have to learn how to move past her loss and adapt to her new life and role.

Retrieved from "https://dc.fandom.com/wiki/Supergirl_Vol_6?oldid=2518721"
Community content is available under CC-BY-SA unless otherwise noted.