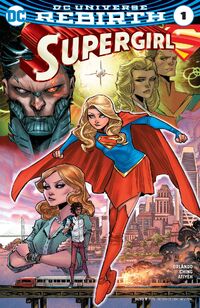 Supergirl (Volume 7) is one of many series released as part of DC Rebirth, a publishing initiative by DC Comics that saw many series relaunched. Kara lost her powers at the end of her previous comic series. Her attempt to regain them sets a new status quo for the character, one that is more reflective of the Supergirl TV series airing at the time of its publication.

In 2018, the book suffered a brief hiatus as a consequence of DC restructuring the Superman line. Shortly after Steve Orlando's run ending up with #20 it was announced Supergirl's book would return with October 2018's Supergirl #21, helmed by Marc Andreyko and Kevin Maguire. The last two issues were released as digital-only in the aftermath of CoVid-19 affecting the physical comic market.

Retrieved from "https://dc.fandom.com/wiki/Supergirl_Vol_7?oldid=2727169"
Community content is available under CC-BY-SA unless otherwise noted.