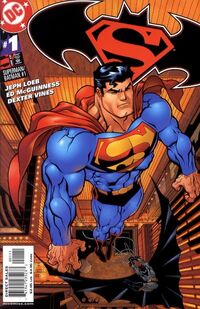 Superman/Batman (Volume 1) is a comic book series featuring the team-up adventures of Superman and Batman. Superman/Batman explored the camaraderie, antagonism, and friendship between its title characters. Jeph Loeb, the series' first writer, introduced a dual-narrator technique to present the characters' often opposing viewpoints and estimations of each other, which subsequent series writers have maintained. Most of the story arcs were independent and self-contained from the ongoing or crossover storylines in the other Batman and Superman comic titles.

Retrieved from "https://dc.fandom.com/wiki/Superman/Batman_Vol_1?oldid=2695209"
Community content is available under CC-BY-SA unless otherwise noted.