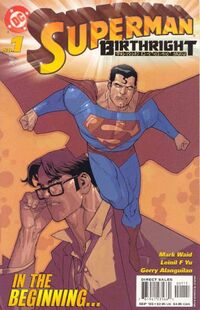 Superman: Birthright was a twelve-issue limited series written by Mark Waid and illustrated by Leinil Francis Yu. The series was published from September of 2003 until September of 2004. Birthright re-envisioned Superman's origin for contemporary readers, branching away from the modern Post-Crisis history first established in John Byrne's Man of Steel limited series, and subsequent follow-up tales. Birthright incorporates many plot elements from the Silver Age of Comic Books and the WB/CW television series Smallville including younger, more vibrant versions of Jonathan and Martha Kent, as well as the heretofore unrevealed history of Lex Luthor's adventures in Smallville, and hinting at the existence of another Kryptonian survivor.

Due to Superboy-Primne's affecting continuity and the effects of the Infinite Crisis, however, Birthright is no longer considered the authoritative canonical origin of Superman and his supporting cast. Birthright was replaced with Geoff Johns' Superman: Secret Origin.

Retrieved from "https://dc.fandom.com/wiki/Superman:_Birthright_Vol_1?oldid=2091886"
Community content is available under CC-BY-SA unless otherwise noted.