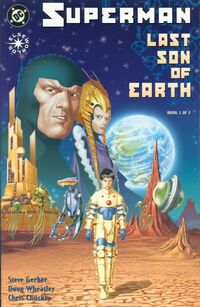 Superman: Last Son of Earth is a DC Comics Elseworlds tale released in 2000. It was written by Steve Gerber with art by Doug Wheatley. The story is a reverse of the usual Superman origin with him being sent from Earth to Krypton and discovering a Green Lantern Ring, which he uses to become a superhero.

The story is further expanded in Superman: Last Stand on Krypton.

Retrieved from "https://dc.fandom.com/wiki/Superman:_Last_Son_of_Earth_Vol_1?oldid=1479725"
Community content is available under CC-BY-SA unless otherwise noted.