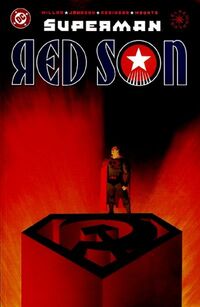 Superman: Red Son is a three-issue prestige format comic book mini-series published by DC Comics that was released under their Elseworlds imprint in April, 2003. Author Mark Millar created the comic with the premise "what if Superman had been raised in the Soviet Union?" It received critical acclaim and was nominated for the 2004 Eisner Award for best limited series.

Retrieved from "https://dc.fandom.com/wiki/Superman:_Red_Son_Vol_1?oldid=1693325"
Community content is available under CC-BY-SA unless otherwise noted.