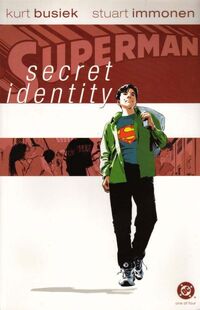 Superman: Secret Identity is a four-issue mini-series of 48 pages each in prestige format, written by Kurt Busiek and illustrated by Stuart Immonen. The first issue was published in January 2004, and the limited series ran until April 2004. The title was not released under the Elseworlds banner, but is regarded as a non-canonical story. The story describes the life of Clark Kent, a man in a world in which the superheroes are alive only in the comics, who suddenly gains the powers of Superman and embarks on a super-heroic career, but keeps his existence secret from the world at large.

Retrieved from "https://dc.fandom.com/wiki/Superman:_Secret_Identity_Vol_1?oldid=2365251"
Community content is available under CC-BY-SA unless otherwise noted.