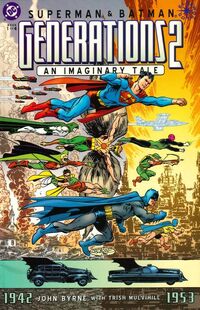 Superman & Batman: Generations 2 (or II) was a four-issue Elseworlds limited series written and drawn by John Byrne as a sequel to Superman & Batman: Generations Vol 1. Set in the same continuity where characters age according to the calendar, each issue contains two stories set 11 years apart, starting in 1942 and ending in 2019. The cast of characters was expanded for this series to include other residents of the DC Universe, including the Justice Society of America, Blackhawk Squadron and many Silver Age heroes.

Retrieved from "https://dc.fandom.com/wiki/Superman_%26_Batman:_Generations_II_Vol_1?oldid=2544786"
Community content is available under CC-BY-SA unless otherwise noted.