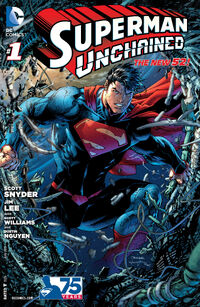 Superman Unchained is a comic book series starring Superman. The series is launched as a celebration of the 75th anniversary of the Superman character. Scott Snyder and Jim Lee were the primary creators. Though originally billed as an ongoing series, it lasted for the duration of the duo's collaboration.

Retrieved from "https://dc.fandom.com/wiki/Superman_Unchained_Vol_1?oldid=2303162"
Community content is available under CC-BY-SA unless otherwise noted.