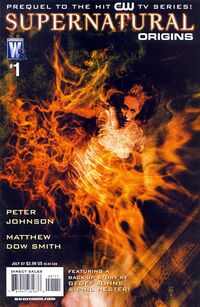 Supernatural: Origins was a six-issue limited series published by WildStorm Productions in 2007. The series is based on the WB/CW Network television program Supernatural and serves as a prequel to the series, and is regarded as being a canonical part of Supernatural continuity. The series features John Winchester at the beginning of his career as a hunter, with his young sons Sam and Dean.

Retrieved from "https://dc.fandom.com/wiki/Supernatural:_Origins_Vol_1?oldid=2739573"
Community content is available under CC-BY-SA unless otherwise noted.