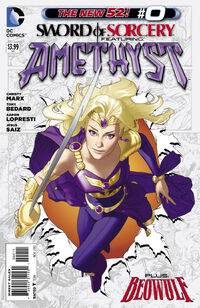 Sword of Sorcery (Volume 2) was a fantasy anthology released as DC's "Third Wave" of relaunches after The New 52. It included Princess Amethyst in its main feature, and backups starring Beowulf and Stalker before it was cancelled with its eighth issue.

Retrieved from "https://dc.fandom.com/wiki/Sword_of_Sorcery_Vol_2?oldid=2073896"
Community content is available under CC-BY-SA unless otherwise noted.