Taia is a powerful magic-user and the lover of Ibis the Invincible. Born as a princess in ancient Egypt, she fell in love with the wizard Prince Amentep. Amentep's rival the Black Pharaoh attacked them, forcing Amentep to place both of them in suspended animation. They were awoken by Shazam in the present day, and Amentep took the name Ibis. The two lovers have had many adventures fighting evil since then. She has also been a member of the Squadron of Justice. Taia was created by Bill Parker and C.C. Beck, first appearing in Whiz Comics #2. (1940) 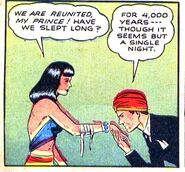