Takion is the second Highfather, leader of the good New Gods of New Genesis. Born as a human on Earth, blind psychologist Josh Saunders was selected for this destiny by the original Highfather known as Izaya. Izaya chose Saunders as his successor and gave him a powerful connection to the celestial force known as the Source. Saunders took over as Highfather when Izaya was killed by Ares during Genesis. Takion was created by Paul Kupperberg and Aaron Lopresti, first appearing in Takion #1. (1996) 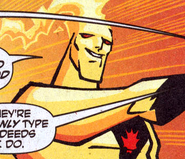