Back to page
View source

All these reboot is hurting my head. Because of Flashpoint it gives birth to The New 52. So my question is that when Barry returns to The New 52 in Flashpoint Vol 2 5 in which point of time did he return to? Is it during before or after Forever Evil, or etc? --Cococrash11 (talk) 08:34, September 14, 2014 (UTC)

Anyone know the reason why the main pic was changed from this? I personally prefer the this one.

Not that we know of. The Speed Force has been established as the force that makes time itself move forward, not just a source for speedsters' power like previously. This means it has likely existed since the beginning of time.--Sromero78 (talk) 01:30, May 7, 2017 (UTC)

Both ideas are correct. Barry created the Speed Force, but it has always existed anyway. Think about it; Max Mercury, Savitar, Johnny Quick, Jay Garrick. These guy became speedsters way before Barry was born. Besides, it's the stuff time and space are made of and this is comic books, so it's not that hard to believe that the Speed Force existed before Barry created it. DCLover1995 (talk) 01:51, May 7, 2017 (UTC)

I was referring to the Pre-Flashpoint continuity, and I don't think it's fair that the Reverse-Flash is still considered the generator of the Negative Speed Force despite no prior evidence while Barry is a mere conduit of the Positive Speed Force. DCLover1995 (talk) 02:24, May 7, 2017 (UTC)

Hey guys, I apologize for changing the main picture of the page a while ago. I was unaware we were supposed to make a discussion for it first. Anyway, I think this would make a better picture since it shows his entire body as opposed to the current one which doesn't. Even though it's not a textless cover, the small text box in the corner doesn't seem like a problem to me, since it's so small. --Slayer274 (talk) 02:54, July 8, 2017 (UTC) 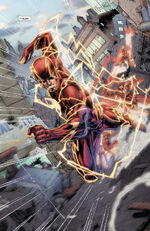 Introductory Video (or whatever)

I just looked through the first few rebirth flash issues and Barry says "But that lightning gave me access to an energy I called the Speed Force." So I think it's safe to say that he didn't create the speed force, although he did create the term "speed force". The only thing that contradicts this is the fact that in Justice League it was stated that Barry created the speed force the day he was hit by lightning. Either this is a mistake, since it directly contradicts what was stated in the current flash book, or they were referring to him creating the concept of the speed force, but not the force itself. --Sromero78 (talk) 05:43, March 7, 2018 (UTC)

Barry says in justice league rebirth AND the flash rebirth (issue 1) book he created the Speed force when he was hit by lightning (not the concept of it) that's two sources and he won't always say he creates it he may just say he is connected but nothing contradicts the fact he makes it.Tyman1102 (talk) 12:26, March 7, 2018 (UTC)Tyman1102

Are you referring to The Flash: Rebirth Vol 1? If so, that is no longer cannon. The Speed Force's history has been completely changed since then. The only time that this was stated post-flashpoint was in the Justice League book, although as I said, that contradicts the current Flash book, so I wouldn't change the powers because of that.--Sromero78 (talk) 23:21, March 7, 2018 (UTC)

I know the original rebirth is no longer cannon. I'm referring to the most recent rebirth. towards the beginning of the second issue right after Barry finds out about Wally he says the night he was hit by lightning he created the speed force.Tyman1102 (talk) 23:23, March 8, 2018 (UTC)Tyman1102

Are you sure you're not mistaken? I've just double checked and that was never stated in that issue. I've read all of the post-flashpoint flash comics and i'm positive it's never been stated that barry generates the speed force post flashpoint.--Sromero78 (talk) 00:26, March 9, 2018 (UTC)

Oh okay I see what you are referring to now, although he does say that the act of him being hit by lightning created it, not really him himself, such as when Eobard created the Negative SF. It's still a little ambiguous to me since that contradicts what was established earlier in the flash run. For all we know he could be talking about the concept of it, since the Speed Force had to exist at the beginning of time. And this is still not enough for me to call him the generator of it, since that has never been stated, but I would be fine with including the fact that it was created when he was hit by lightning, but I still think we should only call him a conduit.--Sromero78 (talk) 03:42, March 9, 2018 (UTC)

It should be taken over the earlier run because it's more recent it could be a retcon or it could be Barry only remembered it after rembering Wally and there is nothing that actually contradicts this even in the earlier run but either way two different sources say Barry made the Speed Force not the concept as nothing even comes close to implying the concept it says he made the speed force itself.Tyman1102 (talk) 04:21, March 9, 2018 (UTC)Tyman1102

The part that doesn't make sense is that if the speed force is what moves time forward, how was it was created when Barry was hit by lightning, This is why I was saying he is possibly referring to the concept. Anyway, would you be fine with leaving him as a conduit? "Creating" it and generating it like he did pre flashpoint are two different things. --Sromero78 (talk) 05:15, March 9, 2018 (UTC)

The exact line is "the night I was hit by lightning and doused in chemicals, it created the Speed Force" in The Flash (2016) #1. Justice League (2016) #5 says "Well, the Speed Force was created the moment I got struck by lightning." Neither issue says HE created it, nor that he generates it. These are the the most recent mentions of this, and thus are the ones that should be taken as canon. The event itself created the Speed Force, not him; your slight altering of the wording changes the meaning of the sentence. Also, it's The Flash (2016) #1 or The Flash Vol 5 1, not The Flash Rebirth #1; that's the one-shot. FuzzyBarbarian (talk) 01:04, March 10, 2018 (AEDT)

It was created by Barry as the event itself was him getting hit with lightning which is what made it. Also in the justice league issue right after Barry's says when he was struck it made the speed force Barry says that the speed was stolen from him implying that he created the speed force.Tyman1102 (talk) 21:35, March 9, 2018 (UTC)Tyamn1102

Upon further review of the flash comics I have found an actual statement that flat out says Barry generates the Speed Force. On the hard cover copy of the flash 2011 run volume 4 titled Reverse the fold on the inside of the cover describing the events that happen in the book says and I quote "As the Flash, Barry Allen taps into the Speed Force enabling him to move at astonishing speeds. But he doesn't just use the Speed Focrce - he generates it with every step he takes like a human dynamo". Therefore we should leave it as speed force generation as there is nothing that contradicts this statement and there is no room for interpretation.Tyman1102 (talk) 05:56, March 10, 2018 (UTC)Tyman1102

I've kept out of it to see where this went, but I was requested to pass my almighty admin judgment. I have not read most of Flash, and for that end, I relied on what others said before. Based on this elaboration here, I'm with Fuzzy.
As for the blurb on the back or inside of a trade paperback: that's written by a different department, not the actual writers. It's not necessarily author intent. Like when the back of JLA: Earth-2 called the Antimatter Universe Earth-2, while the story gave that name to the Positive Matter Universe. They can make mistakes. A promotional blurb (or sollicit) itself does not overrule on-panal statements. --Tupka217 09:36, March 10, 2018 (UTC)

Even if the promotional blurb doesn't overrule on panel statements there has not been anything stating he doesn't generate it in the comics itself though so there is nothing contradictory about the statement.Tyman1102 (talk) 09:47, March 10, 2018 (UTC)Tyman1102

Actually there is I found another source in the flash 2011 run issue 6 I believe. Dr.Elisa and Barry say Barry builds up speed force energy when he runs and we see this true when Dr. Elisa siphons of the Speed Force Barry is generating a few issues later into batteries.Tyman1102 (talk) 10:11, March 10, 2018 (UTC)Tyman1102

Is he explicitly said to be generating it, or is that your interpretation of things? If he "builds up" energy, it could just as well be that he takes that energy out of the Speed Force, rather than generating it himself. Which would make him a conduit, not a generator. --Tupka217 10:36, March 10, 2018 (UTC)

Faster than the Reverse-Flash

I think the reason we tend to think Eobard is much faster is the fact that he can effortlessly time/dimension travel, which is liekly a side effect of the negative speed force, rather than raw speed. Although Barry did say he was faster than himself and Wally (although not sure which wally he was referring to, probably Kid Flash.) Maybe Barry just got faster recently? He was able to almost keep up with Wally Flash recently. --Sromero78 (talk) 22:28, July 7, 2018 (UTC)

Isn't the SEO page his New Earth article at Flash (Barry Allen)? To be honest, that page should have been moved to Barry Allen (New Earth) long ago. And I don't really think SEO works too well. But if we were to move this to Barry Allen (Prime Earth), I think we should move all versions of Barry to Barry Allen (<universe designation>), and move all Supermen from Kal-El to Clark Kent and James Olsen to Jimmy Olsen. SeanWheeler (talk) 03:55, December 29, 2018 (UTC)