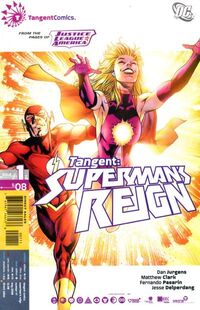 Tangent: Superman's Reign is a twelve-issue maxiseries published between March, 2008 and February, 2009. The story features the regular heroes of the DC Universe crossing over into the Tangent Universe, and teaming up with Tangent heroes to help put a stop to the oppressive regime of the Tangent Superman. It is primarily being written by Dan Jurgens.

Retrieved from "https://dc.fandom.com/wiki/Tangent:_Superman%27s_Reign_Vol_1?oldid=1479776"
Community content is available under CC-BY-SA unless otherwise noted.