Team 7 is a black-ops military unit working for the U.S. Government. They were originally part of the Wildstorm Universe, working underneath Miles Craven of I.O.. This team included Arclight, Backlash, Bulleteer, Deadeye, Deathblow, Slaphammer, Topkick and Wraparound. Craven exposed them to the Gen-Factor on a suicide mission, leading them all to develop super-powers. There were several precursor teams including Team Zero and Team One. Their successor team is Wetworks, and their children are Gen 13. They were later introduced into the DC Universe in the New 52 reboot, changing their history. Team 7 was created by Chuck Dixon and Aron Wiesenfeld, first appearing in Team 7 #1. (1994) 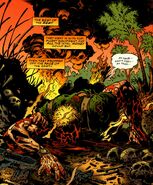