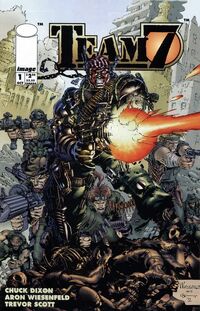 Team 7 (Volume 1) is a mini-series written by Chuck Dixon with illustrations by Aron Wiesenfeld. It was published by WildStorm Productions through Image Comics. The series takes place in the 1970's and introduces Team 7, a group of important figures in the Wildstorm Universe. Dixon's work was popular enough to merit a sequel, Objective: Hell, later that year.

Retrieved from "https://dc.fandom.com/wiki/Team_7_Vol_1?oldid=1924859"
Community content is available under CC-BY-SA unless otherwise noted.