""Halfway to Holocaust"": While Speedy and Wonder Girl battle an extradimensional creature that suddenly appears in the criminals' control-room, Robin and Kid Flash, under the control of the aliens, are used to discover a third dimensional world, invisible to the Dimension-X-dwellers, which exis

"The Origin of Wonder Girl"


Appearing in "Halfway to Holocaust"

Synopsis for "Halfway to Holocaust"

While Speedy and Wonder Girl battle an extradimensional creature that suddenly appears in the criminals' control-room, Robin and Kid Flash, under the control of the aliens, are used to discover a third dimensional world, invisible to the Dimension-X-dwellers, which exists adjacent to both their world and Earth. Escaping, they rejoin their teammates in this adjoining dimension, only to be pursued by the aliens. The battle between Titans and aliens is cut short when a community-intelligence being, the sole sentient native of the newly discovered dimension, takes on the form of a giant archer in imitation of Speedy, and drives the minions of Dimension X back to their own world. Promising that never again will beings from Dimension X use his world as a gateway to Earth, the "archer" allows the Titans to depart in peace.


Appearing in "The Origin of Wonder Girl"

Synopsis for "The Origin of Wonder Girl"

Upon the Titans' return to Earth, Wonder Girl unexpectedly collapses, the result of a recently recurring series of fainting spells. In explanation, she tells the other Titans her origin for the first time. As a child, she had been saved from an apartment building fire by Wonder Woman, and taken by her to Paradise Island to live after all attempts to ascertain her identity or those of her parents (presumed to be a couple killed in the blaze) had failed. 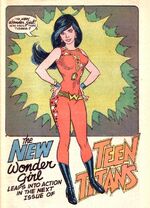 Wonder Girl's New Outfit
Becoming Queen Hippolyta's foster daughter and Wonder Woman's foster sister, she was unable to compete with the Amazons on a physical level, lacking their special powers, and so was given powers almost identical to those of Wonder Woman by scientist Paula von Gunther's Purple Ray.

Returning to the outside world to join the Teen Titans, she was forced to stay behind when the other Amazons sojourned to another dimension to recharge their magical powers (as shown in Wonder Woman), and had been secretly living in Titan Lair since that time. Now, she takes the name Donna Troy as a civilian identity and moves into an apartment in Greenwich Village with new friend Sharon Tracy. Later, she is contacted by Queen Hippolyta, who informs her that the Amazons' use of the Purple Ray had been accidentally responsible for her recurring weak spells, a problem which has now been corrected. Wonder Girl celebrates her new life by designing a new costume and changing her hairstyle.

Retrieved from "https://dc.fandom.com/wiki/Teen_Titans_Vol_1_22?oldid=2528266"
Community content is available under CC-BY-SA unless otherwise noted.