The Ten-Eyed Man is an enemy to Batman with enhanced senses. Philip Reardon lost his eyesight in an explosion, and a doctor reconnected his optic nerves to his fingertips. Having ten eyes on his fingers allows him to see more than an average person. This augments his abilities as a veteran of the U.S. Special Forces during the Vietnam War. Reardon died during the Crisis on Infinite Earths, and was erased from Post-Crisis continuity. During 52, Batman encounters a nomadic tribe called the Ten-Eyed Men of the Empty Quarter. There is an exiled member of this group who becomes a terrorist, known as the Nine-Eyed Man because he is missing a finger. Ten-Eyed Man was created by Frank Robbins and Irv Novick, first appearing in Batman #226. (1970)

Philip Reardon
TV Series
The Brave and the Bold 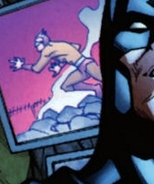