You've made your father's killers pay for his murder, then put your own needs aside to help the city when it most needed a hero. You've honored the reputation of Batman many times over and for that, I thank you.

Terry McGinnis is the second Batman, the successor of the Bruce Wayne. He protects Neo-Gotham in a cyberpunk future.

Terry McGinnis was the product of genetic engineering by Project Cadmus director Amanda Waller, who saw that her once-adversary and now ally Batman would need a replacement and that the world needs a Batman to continue the fight for justice. By using her old Cadmus connections, Amanda began "Project Batman Beyond" by taking Bruce Wayne's DNA from blood samples left behind during his cases and created from it in a nanotech solution that was able to rewrite a male human's reproductive material into an exact copy of Bruce Wayne's. Amanda looked for a suitable couple in Gotham City with a psychological profile that was nearly identical to Bruce's parents, and found the McGinnises as the target subject. Warren McGinnis thought he was getting a flu shot at a hospital, when in reality he was secretly given the injection with the nanotech solution so that his offspring would actually be that of Bruce's in the biological sense. A year later, Mary McGinnis gave birth to Terry, who possessed half his mother's genetic material and half of Bruce's.

With the genetic element accomplished, Amanda thought of making Terry's decision to become Batman (or at least a crimefigher) complete by having the same thing done to Terry's parents as it was done to Bruce's. After Terry and his parents left the theater on an evening of watching The Grey Ghost Strikes, Amanda had the Phantasm go after Terry's parents and kill them, thus sparking the same type of trauma that inspired Bruce Wayne to become Batman. However, as the Phantasm tried to accomplish this task, she ended up refusing to go along with the plan and allowed the McGinnises to continue on unaware of what might have happened. Amanda argued with her hired assassin about her failure, but she ended up realizing that the Phantasm was right: that though the Batman was obsessive in nature and that he would do anything to achieve his goals, he would never resort to murder. Amanda ended up honoring all that the original Batman stood for and allowed the Phantasm to simply walk away.

By his own admission, Terry was once a "bad kid." A member of a street gang run by youthful racketeer Charlie "Big Time" Bigelow, Terry had his fair share of run-ins with the GCPD while in his early teens, even serving a three-month stint in juvenile hall. Years after Batman was last seen, he found himself on the run from another street gang named the Jokerz, who had modeled themselves after the deceased Clown Prince of Crime. Terry fled onto the grounds of Wayne Manor, where an aged Bruce Wayne assisted him in defeating the Jokerz. The strain of the fight placed substantial stress on Bruce's heart and he collapsed. Terry helped Bruce into the mansion and in the process, stumbled upon the entrance to the Batcave.

Bruce kicked Terry out, but when the boy showed up later, saying that his father, Warren McGinnis, had been murdered and that Derek Powers — who had assumed leadership of a merged Wayne-Powers — was responsible, he softened his demeanor. Despite Terry's insistence, Bruce, still shaken from the ordeal of having relied on a gun for self-defense, maintained that he had given up the cowl.

As soon as Bruce's back was turned, Terry took matters into his own hands and stole the latest incarnation of the Batsuit. Bruce admonished him through the suit's communicator (their mentor-pupil banter would become a staple of subsequent Batman Beyond episodes), but Terry was adamant on confronting Powers. Powers had ordered Warren McGinnis' death after the latter discovered Powers' plan to mass-produce biological weapons.

The high-tech Batsuit turned Terry into a powerhouse; he disrupted Powers' covert operation, laying a beating on the security personnel, only to have Bruce shut the Batsuit down midway at the touch of a button. Terry pleaded with Bruce for a chance to prove himself and persuaded Bruce to reactivate the Batsuit and let him carry on as Batman for the time being. Bruce's decision resulted in the moratorium of Powers' operation; at the end, Powers, who had been exposed to his own hazardous chemicals, experienced the onset of his mutation into Blight.

Convinced that there was still a need for a Batman, Bruce hired Terry as his personal assistant and began secretly training the teenager for his new role as Batman. 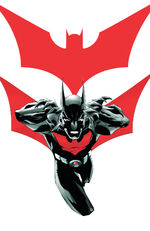 McGinnis and Wayne would continue to develop a working relationship with Wayne tutoring and advising McGinnis as the Batman from his reactivated Batcave. It was Wayne who largely still doing the mental detective work while McGinnis did most of the actual battles in the enhanced armored suit. Wayne at times would become incapacitated due to his advanced age or prevented from directly helping Terry for other reasons. This would lead McGinnis to depend on his long time technically savvy friend Maxine Gibson as his detective partner. "Max" who would puzzle out McGinnis being the new Batman and Wayne as the former Batman would join McGinnis as his active partner. Max was originally thrilled by her discovery and even for a time fancied herself to become the next active crime-fighting member of the reconstituted Batman Family. However, both the elder Wayne and Police Commissioner Barbara Gordon largely tried to prevent that, knowing fully the dangers of active costumed crime-fighting. But it was not until Max directly experienced first hand the intricate and explicit dangers that McGinnis was willing to endure as the new Batman where she was almost killed by the silent assassin Curaré did Max curb her childish enthusiasm about running around as a costumed crime-fighter. However, this made Max merely more cautious and more determined not to let her friend go out alone as Batman as shown in later episodes. It was unrevealed if Max ever became the next Batgirl or an active costumed sidekick to McGinnis, though it was suggested that she did. 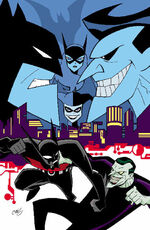 When the Joker made his mysterious reappearance in Gotham City, Bruce wanted Terry to give back the Batman costume, fearing for the young man's life as he did for his former partner Tim Drake (the second Robin), who was kidnapped by the Joker and was forced into a "makeover" into the Joker's "adopted son" nicknamed J.J. However, Terry discovered that the Joker had implanted a microchip onto Timothy Drake that caused him to physically transform between his older self as Drake and an exact copy of the Joker. During a fight between himself as Batman and the new Joker, Terry used the Joker's electrical joy buzzer to destroy the implanted microchip, thus restoring Drake to normal. Drake saw in McGinnis a person that Bruce Wayne had found worthy to bear the mantle of Batman.

Retrieved from "https://dc.fandom.com/wiki/Terrence_McGinnis_(DCAU)?oldid=2854369"
Community content is available under CC-BY-SA unless otherwise noted.