Start a Wiki
This page contains information about Testament (Volume 1) . This title is
Testament Vol 1 (2006-2008)
(published by Vertigo) 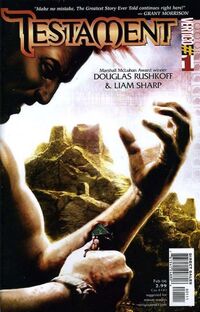 Testament was an American ongoing comic book series written by Douglas Rushkoff with art and covers by Liam Sharp. It was published from February 2006 to March 2008 under DC Comics' Vertigo imprint.

The story takes place simultaneously in the near future and the biblical past, illustrating the story's theme: that history repeats itself. In the near future grad student Jake Stern and his conscientious objector friends fight against the new RFID-based universal draft by attempting to access the collective unconscious through an experimental combination of the hallucinogenic preparation ayahuasca and shared sensory deprivation tank experiences. The near future story is mirrored through the history-repeats-itself idea as biblical narrative based on Torah, various Jewish and Christian apocrypha and elements of other mythologies. One major departure from Judeo-Christian tradition in Testament is the separation of The One True God into two entities who in the story are represented by the God Elijah, who represents the Abrahamic One True God, and a new entity of the authors invention which he calls The One True God. Much of the action in the story is driven by situations and characters being manipulated by the various gods as they battle for dominion over existence.

Retrieved from "https://dc.fandom.com/wiki/Testament_Vol_1?oldid=1433863"
Community content is available under CC-BY-SA unless otherwise noted.