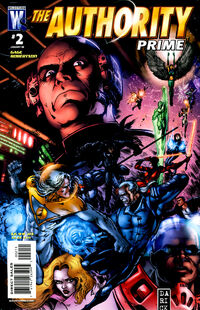 The Authority: Prime is a six-issue miniseries, as the intended arc would have spanned issues #6 to #11 of The Authority, volume 3. It feature the renewed Stormwatch Prime, who along with the Authority investigating a recently discovered secret bunker that once belonged to Henry Bendix.

Retrieved from "https://dc.fandom.com/wiki/The_Authority:_Prime_Vol_1?oldid=1926216"
Community content is available under CC-BY-SA unless otherwise noted.