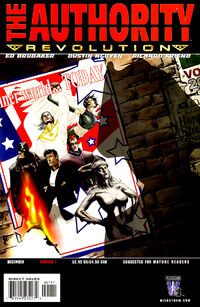 The Authority: Revolution sets after the events in Coup d'État, and features the Authority's rule over the United States of America. As a result, The Authority faces further troubles from a group of retire, yet rejuvenated, superheroes from the 1940's, 50's and 60's. Unbeknown to all, these events are manipulated by an old enemy of the Authority before the team was ever founded.

Back to Comics Contents : Comics T : The Authority: Revolution Vol 1

Retrieved from "https://dc.fandom.com/wiki/The_Authority:_Revolution_Vol_1?oldid=1926214"
Community content is available under CC-BY-SA unless otherwise noted.