This page contains information about The Authority (Volume 1) . The Authority is created by writer Warren Ellis and Bryan Hitch which introduce the first appearance of the title superhero team. The run was hugely successful with readers, providing a fo 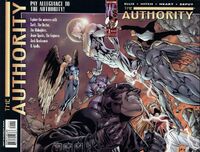 The Authority is created by writer Warren Ellis and Bryan Hitch which introduce the first appearance of the title superhero team. The run was hugely successful with readers, providing a form of large scale superhero action which was (at the time) not common in comics. Ellis never obviously delved into the politics of his characters; he left that to the reader to decide. This was soon to change after Ellis and Hitch finished their run on the series.

The later half of the series was co-created by Mark Millar and Frank Quitely. The series under Millar and Quitely proved to be highly controversial and led into the title suffering from censorship by DC. The first instance of this censorship was a removal of a kiss between Apollo and Midnighter due to DC's concern that it would lead to negative media reports. The matter would come to ahead after the events of the September 11 attacks during Millar's final story arc, "Brave New World". This happened in issue #22, which proved to be Quitely's last issue as artist. Issue #23 was delayed after the 9/11 attacks, and a one-shot special (written and drawn by Bryan Hitch) entitled The Authority: Widescreen was canceled outright due to concerns about the violence in that issue.

Back to Comics Contents : Comics T : The Authority Vol 1

Retrieved from "https://dc.fandom.com/wiki/The_Authority_Vol_1?oldid=2403336"
Community content is available under CC-BY-SA unless otherwise noted.