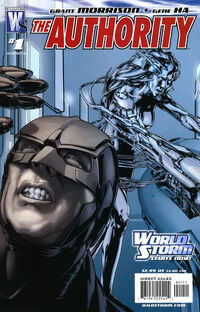 The Authority (Volume 3) is an ongoing series written by Grant Morrison with illustrations by Gene Ha. It was published as part of the WorldStorm reboot, following Brubaker's Authority volume Revolution. Morrison stopped working on the series after 2 issues because of a heavy work load. The next volume published was Gage's Prime. Three years later, Keith Giffen would complete Morrison's work as a 12-issue mini-series titled The Lost Year.

Retrieved from "https://dc.fandom.com/wiki/The_Authority_Vol_3?oldid=1479810"
Community content is available under CC-BY-SA unless otherwise noted.