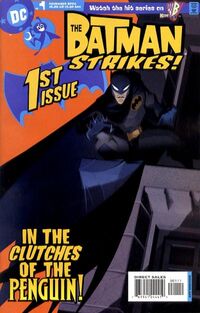 The Batman Strikes! was first released in 2004 and completed its run in 2008. The series is adapted from the Kids WB cartoon block The Batman and does not take place within the continuity of the other mainstream Batman titles. While four collections were solicited for this series, two were published in 2005, and a third was delayed by nearly a year. The fourth collection, titled "Behind the Shadows", was never published.

Retrieved from "https://dc.fandom.com/wiki/The_Batman_Strikes!_Vol_1?oldid=2475548"
Community content is available under CC-BY-SA unless otherwise noted.