"The Amazing Story of Superman-Red and Superman-Blue!": This story is reprinted from Superman #162.

The New Superman and Batman Team

This story is reprinted from Superman #162.

Superman is scolded by the Kandorians for failing to live up to his goals to enlarge Kandor, cure Kryptonite, and end crime on Earth. Shamed, he uses a machine he has devised, which is powered by the various forms of Kryptonite, in order to increase his intellect a hundredfold in order to complete these tasks. The process succeeds, but it also splits him into two near-identical beings: Superman-Red and Superman-Blue.

Together, these two Supermen recreate Brainiac's enlarging ray to restore Kandor to its proper size and place it on a New Krypton, which they have created from the remains of the old planet. This, incidentally, removes every bit of kryptonite from the Universe since it all now constitutes the restored Krypton and is rendered harmless. Superman-Red and Superman-Blue next create an anti-evil ray that ends all villainous tendencies on Earth. Thus, a reformed Lex Luthor develops a panacea that cures all physical ailments and defects, which transforms Earth into a paradise. Retiring, Superman-Red marries Lois Lane and moves with her to New Krypton, and Superman-Blue weds Lana Lang and remains on Earth where he devotes his life to science. He also assigns his Superman Robots with the task of dealing with any future natural disasters.


Appearing in "The New Superman and Batman Team"

Synopsis for "The New Superman and Batman Team"

This story is reprinted from World's Finest #167. 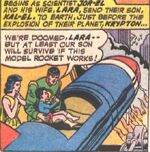 The Origin
From the dying planet Krypton, Jor-El sends his only son Kal-El on a Kryptonian Rocket towards planet Earth. However, on his journey, the baby comes across a big rock of Gold Kryptonite, which renders him powerless. Upon landing on Earth, Kal is adopted by Jonathan and Martha Kent and he is named Clark Kent.

In his high school years, Clark becomes good friends with Lex Luthor, a scientific genius who experiments with strange chemicals that will grant him super powers. When his formula proves successful, he starts wearing an indestructible suit and becomes Superboy. Lex uses his power for good and keeps the secret from Clark and his friends. Unfortunately, Mr. and Mrs. Kent are murdered by a mugger, leaving young Clark an orphan. Clark is determined to fight the criminals for the rest of his life and he is inspired by a Bat. Clark is adopted by his millionaire Uncle Kendall, but after his death, all the money is given to Clark, who uses it to become the greatest crime fighter, Batman.

Capturing Brainiac
Years pass and Lex becomes Superman while Clark has gained a good reputation in Gotham City as Batman. Their paths would cross once again when Lex is tasked to interview Clark as part of his job at the Daily Planet and he is accompanied by Lois Lane, who inmediately falls for Clark. However, as the reporters are leaving the Kent Manor, Lois is abducted by Brainiac, who tries to make her part of his collection. Superman tries to break into the space ship, but he is not able to break through the barrier. Batman soon joins Superman's effort and together they break inside and capture the rogue Braniac.

After this encouter, Batman and Superman would team-up in several occasions and Clark would start a romantic relationship with Lois. Finally, Clark and Lois get married and during the honeymoon, Clark reveals both his and Lex's secret as Batman and Superman. 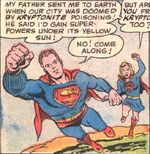 The Arrival of Supergirl
Shortly after this, a spaceship lands on Earth and Supergirl comes forth. She is first greeted by Lex, who decides to help her by taking her to the Kents, who give her a secret identity as Linda Kent, Clark's cousin. Later, Superman, Batman and Supergirl go on their first mission together to capture the Toyman, a criminal who was terrorizing Gotham with a giant machine. During the encounter, Batman is exposed to a special ray gun from Toyman and he starts glowing like Gold Kryptonite. Supergirl explains the effects of that substance on Kryptonians and Lex deduces Clark's past and heritage and the accident that eliminated his powers.

In the Batcave, Lex works on a special machine that will cure Clark from his dying condition and as the machine is started, Lex's powers are switched to Clark, while the gold fever is turned on Lex. Clark wakes up fully recovered and with his Kryptonian powers back while Lex is human again and he has become a dangerous source of golden kryptonite radiation. For this reason, Lex decides to leave Earth on a special ship he built and Superman's legacy continues with Clark, who drops the Mantle of the Bat and becomes the righteous Man of Steel.

This story is reprinted from Superman's Girl Friend, Lois Lane #19.

This story is reprinted from Superman's Girl Friend, Lois Lane #25.

This story is reprinted from Superman #215.

Lois Lane was killed when Dimension Master tried to kill Superman with a special device, and the blast ricocheted in his invulnerable skin, hitting Lois and reducing her to atoms. Superman has a daughter with Lois, who inherited his superpowers and her mother's curiosity.

This story is reprinted from Superman #300.

This issue is an Imaginary Story wherein Kal-El's rocketship landed on Earth in the year 1976, and he did not become Superman until the year 2001.

Kal-El was born on the doomed planet Krypton. He was sent to Earth, where his rocket landed in the ocean and attracted the attention of both U.S. and Soviet military. However, a U.S. sailor, Lieutenant Thomas Clark, reached the rocket first and it was brought to the U.S.

Kal-El shocked the staff on the military base, when he emerged from the ship and displayed his powers. The general in charge, Kent Garrett, dubbed the lad "Skyboy" and had a costume made for him.

In the early 1990s, a third world power had emerged and plotted to start a war between the other two. Skyboy was able to prevent it, but seemingly at the cost of his own life and that of General Garrett. In truth, Skyboy had survived. He threw his costume into the ocean and assumed the alias "Clark Kent" (after the general and the sailor, who had claimed his ship for the U.S.), starting a career as a reporter.

At the dawn of the 21st century, the third world power once again plotted against the rest of the world. They had built an android called "Moka", who took credit for Skyboy's rescue of the world in the 90's and now demanded control of the world. Feeling he had no other option, Clark dove into the ocean and picked up his old costume. He confronted Moka and defeated him, before disappearing again and returned to his regular life as Clark Kent.

Retrieved from "https://dc.fandom.com/wiki/The_Best_of_DC_Vol_1_19?oldid=2366316"
Community content is available under CC-BY-SA unless otherwise noted.