The Books of Magic (Volume 1) 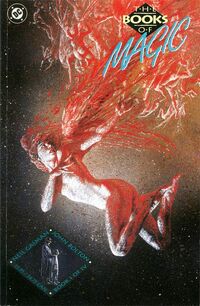 The Books of Magic (Volume 2)

The Books of Magic was a four-issue prestige-format limited series, released from late 1990 to early 1991, meant to explore various magical characters and settings in the DC Universe through the eyes of a twelve-year-old boy named Timothy Hunter, guided by Zatanna and the Trenchcoat Brigade — an newly created, informal team of DC's magic-based characters consisting of John Constantine, the Phantom Stranger, Mister E, and Doctor Occult and Rose Psychic.

Initially meant to be a three-issue series written by J.M. DeMatteis, various production setbacks led to Neil Gaiman becoming a writer instead, with a rotating quartet of artists supplying full-painted illustrations. The series was a success, and editor Karen Berger would launch an ongoing Books of Magic series under DC's mature readers Vertigo imprint to further chronicle Timothy's adventures. In 1999, the Trenchcoat Brigade would reunite for a titular limited series of their own.

Back to Comics Contents : Comics T : The Books of Magic Vol 1

Retrieved from "https://dc.fandom.com/wiki/The_Books_of_Magic_Vol_1?oldid=2548751"
Community content is available under CC-BY-SA unless otherwise noted.