The Books of Magic (Volume 2) 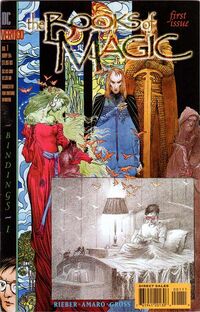 The Books of Magic (Volume 2) is a seventy-five issue ongoing series published by Vertigo from 1994 to 2000. The first fifty issues were written by John Ney Rieber, with the concluding twenty-five written by series artist Peter Gross. It continues the story of young magus Tim Hunter from Neil Gaiman's earlier limited series, and features a number of returning characters from some of Gaiman's other DC/Vertigo work, such as King Auberon and Queen Titania of the Fair Lands, as well as introducing a number of new supporting characters, including Molly O'Reilly, Leah, Araquel, Amadan, Barbatos, Gwendolyn, and Circe. The Books of Faerie volumes one, two, and three are spin-offs of this title, with Gross providing art for the first two volumes, and Rieber writing the third. Following the series's conclusion with issue 75, Tim Hunter's story would be continued in The Names of Magic (Volume 1).

Back to Comics Contents : Comics T : The Books of Magic Vol 2

Retrieved from "https://dc.fandom.com/wiki/The_Books_of_Magic_Vol_2?oldid=2548758"
Community content is available under CC-BY-SA unless otherwise noted.