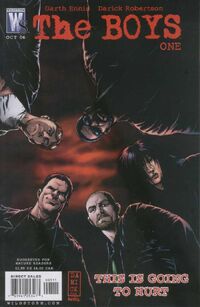 The Boys (Volume 1) was a comic book volume, published by WildStorm Productions. It ran from 2006 until 2007. Written by Garth Ennis and drawn by Darick Robertson, it featured Billy Butcher and his crew, reining in super-heroes in an age where they are treated as celebrities and get away with everything. Only the first six issues of this series were published under DC's WildStorm Productions imprint; due to the graphic nature and anti-superhero tone, it was cancelled. DC reverted the rights back to Ennis and Robertson, who found a new home for it at Dynamite Entertainment. At that publishing company, the series continued until its end in 2012 at #72.

Retrieved from "https://dc.fandom.com/wiki/The_Boys_Vol_1?oldid=2785991"
Community content is available under CC-BY-SA unless otherwise noted.