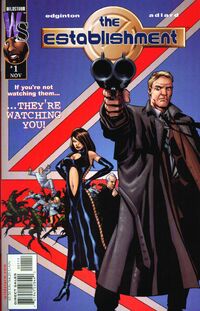 The Establishment is a super hero group that was operated by the British government within the Wildstorm Universe. The comic of the same name was published by WildStorm Productions and ran from 2001 - 2002. It was created by Ian Edginton and Charlie Adlard, who were also sole creative team throughout its entire 13 issue run.

The series focused on the exploits of the current incarnation of the group while defending Britain and the world from various threats including Daemonite attacks, invasion from little green Venusians, plagues of zombies, and an attempt at recreating the universe.

While the majority of the series was self-contained with little contact with the rest of the Wildstorm Universe several minor characters, concepts and hanging plot threads were incorporated into its run. In addition to this it was heavily influenced by British Pop Culture and incorporated various cameos and nods to the various TV series and novels that inspired it.

Back to Comics Contents : Comics T : The Establishment Vol 1

Retrieved from "https://dc.fandom.com/wiki/The_Establishment_Vol_1?oldid=1479821"
Community content is available under CC-BY-SA unless otherwise noted.