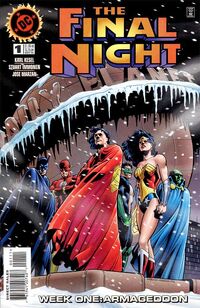 The Final Night was a four-issue comic book series published by DC Comics on a weekly release schedule. The series was written by Karl Kesel with artwork by Stuart Immonen. The series was a top vote-getter for the Comics Buyer's Guide Fan Awards for Favorite Comic-Book Story and Favorite Limited Series for 1997. All four issues of the series were collected in a soft-cover trade paperback edition.

Back to Comics Contents : Comics T : The Final Night Vol 1

Retrieved from "https://dc.fandom.com/wiki/The_Final_Night_Vol_1?oldid=2422533"
Community content is available under CC-BY-SA unless otherwise noted.