Wally tried to lead a normal life along with his wife Linda and their friend Jesse Quick, but he was soon summoned to action when the police confronted some attackers in the industrial section of town. In the confrontation, Wally met with two former love interests: [[Frances Kane (New Earth)|Magenta

The Flash: Blood Will Run

Blood Will Run is a Flash storyline written by Geoff Johns with illustrations by Scott Kolins. It is the second arc in Johns' run on The Flash. This is published following Johns' first arc Wonderland and leading into his third arc Rogues.

Wally tried to lead a normal life along with his wife Linda and their friend Jesse Quick, but he was soon summoned to action when the police confronted some attackers in the industrial section of town. In the confrontation, Wally met with two former love interests: Magenta and Julie Jackam. They all worked together to get the situation under control, and afterwards Julie arrested Magenta for her previous crimes. Wally had gotten over his relation with Magenta, but he had some unfinished business with Julie. When he tried to talk with her, she refused and went on to work. Once in her home, it was revealed that Julie was a single mother and that his baby son Josh, might've been Wally's son as well. Unfortunately, Julie was immediately stabbed and murdered by a stranger in her home and she could never reveal the truth to Wally.[1]

Later, Wally learned that there was a massive ongoing murdering crusade against all the people that he has ever saved. He realized too late that Julie was also part of the hit list. Wally then decided to speak with Magenta, who was locked at the KCPD Headquarters and tried to apologize for his past mistakes, but Magenta lost her mind and attacked Wally. In the struggle, Wally managed to remove Magenta's mask and learned that she had been possessed and was now part of the Cicada Cult.[2] 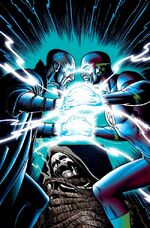 The fight continues until they destroy the main building of the KCPD, where Magenta finally gets the upper hand and leaves the place with Wally as hostage. When Wally recovers, he realizes he had been taken to an underground temple, where Cicada explains his master plan of reviving his deceased wife by taking away Flash's life energy. He stabs Flash with one of his life draining blades and soon, the corpse of his wife opens her eyes.[3] Using Flash's life force, Cicada is capable of return the corpse of his wife to life, but he is shocked to see that she turns against him, as she remembers having been murdered by him. Witnessing the scene, Magenta decides to approach Flash, who takes the chance to project his electric energy unto her body, creating a giant magnet that allows him to escape just as officers Chyre and Morillo arrive at the place. The cops try to stop Cicada, while Flash disarms all members of the cult. Finally, Flash manages to defeat Cicada projecting the speed force unto him. The shock of power leaves Cicada without powers and the police is finally able to arrest him. Moments later, Flash joins Linda, who was previously saved from a certain death by Jesse Quick. Linda and Wally contemplate the ruins of the house they bought after their marriage and they decide to move back to downtown Keystone City.[4] As Wally and Linda moved into their new apartment, they were visited by Linda's parents, but Wally had to go confront a new supervillain that called himself Tar Pit. With some unrequired help from Captain Cold, Flash managed to stop Tar Pit and in the aftermath, he collected some of the criminal's pieces and gave them to Detective Morillo, who would give the samples to STAR Labs. However, Flash then realized that he allowed Captain Cold to escape unnoticed. At that moment, the parents of the Pied Piper were murdered by someone who looks exactly like their son and also, Joseph Jackum started showing the powers that he inherited from his father.[5] Right after that, there was a virus outbreak in the maximum security prison, Iron Heights. Flash broke into the prison with Piper's help and contained the virus, which had been caused by the criminal known as Murmur. During the outbreak, several criminals escaped including Murmur, who was then offered to join the team of the New Rogues.[6] 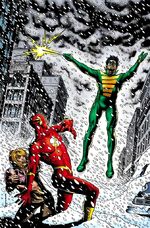 Shortly after this, Flash was introduced to Hunter Zolomon, the newest member of the KCPD and partner of Detective Morillo and Officer Chyre.[7]

Later, Chyre took Josh to Wally and explained that he might be the kid's father. Wally and Linda were shocked by the revelation, but before they could decide upon anything, they were attacked by the Weather Wizard, who was Josh's real father.[8] Linda, Flash and Detective Morillo worked together to prevent the Wizard from taking away the kid, as they learned that he planned to dissect him and learn the source of the kid's powers. The Wizard was captured, he was taken to Iron Heights, but Flash became aware of the unusual activities of the Rogues.[9]

Wally's suspicions were confirmed when a new group of Rogues attacked, only this time it was Magenta, Girder and Murmur who attacked innocent people with no apparent reason. Flash was distracted long enough saving lives, allowing the Rogues to escape.[7]

Retrieved from "https://dc.fandom.com/wiki/The_Flash:_Blood_Will_Run?oldid=2856141"
Community content is available under CC-BY-SA unless otherwise noted.