"No Sad Songs for a Scarlet Speedster!": The Flash's head is grazed by a bullet while he is performing for three orphans, regressing him mentally to an eight-year-old.

"No Sad Songs for a Scarlet Speedster!"

No Sad Songs for a Scarlet Speedster!


Appearing in "No Sad Songs for a Scarlet Speedster!"

Synopsis for "No Sad Songs for a Scarlet Speedster!"

The Flash's head is grazed by a bullet while he is performing for three orphans, regressing him mentally to an eight-year-old.

Synopsis for Zatanna: "Call It... Magic!" 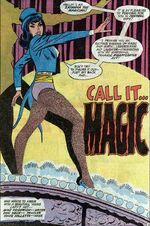 Zatanna is performing on Central City and she requires a volunteer from the audience for her next magic trick. Suspiciously random, Zatanna chooses Flash (Barry Allen), who was among the audience with Iris West and Barry believes that Zatanna chose him because of his alter-ego as Flash. For her magic act, Zatanna will make Barry disappear with a kiss, but when she kisses Barry, Zatanna disappears instead as a cloud appears on stage and she is dragged away.

Zatanna goes through a strange dimension until she arrives to another time, where she witnesses the possession of the sorcerer called Namba by the demon called Xarkon. Zatanna tries to use her magic to exorcise the demon, but the spell fails as it would kill both the sorcerer and the demon in the process.

In the meantime, Barry decides to investigate Zatanna's misterious disappearance and he runs to the Cosmic Treadmill, where he picks up the trail left behind by Zatanna and travels to the time and space that Zatanna was taken. Upon arriving, Flash is confronted by evil medieval warriors, but he defeats them easily before he goes into the castle and finds Zatanna and Xarkon. Flash tries to stop the Demon, but the magic of Xarkon is far too strong for Flash, who is easily paralyzed.

Helpless, the heroes are bound to lose the fight until Zatanna remembers an important detail and finds a way to defeat Xarkon. Zatanna then approaches the possessed body of Namba and kisses the foul beast, forcing the demon out of the sorcerer's body. The Demon's spirit reveals that all his power could only be overcome by the kiss of a young woman and when Namba is free from the possession, he also reveals that he picked Zatanna and took her to his time as only the kiss of a female magician could break the spell. Namba gives Zatanna one last kiss before he sends her and Flash back to the present, where they suddenly appear on stage, still kissing as if nothing had happened. In order to make Zatanna's trick legitimate, Barry uses his super speed to return to his seat, much to the audience's awe.

Retrieved from "https://dc.fandom.com/wiki/The_Flash_Vol_1_198?oldid=2515051"
Community content is available under CC-BY-SA unless otherwise noted.