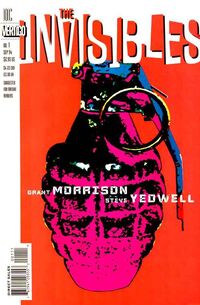 The Invisibles (Volume 1) is the first of three volumes of Grant Morrison's The Invisibles: an attempt at explaining his worldview and how it was impacted by a purported extraterrestrial event.

The Invisibles is an ongoing finite series published under DC's Vertigo imprint. This series is "suggested for mature readers".

Back to Comics Contents : Comics T : The Invisibles Vol 1

Retrieved from "https://dc.fandom.com/wiki/The_Invisibles_Vol_1?oldid=2561060"
Community content is available under CC-BY-SA unless otherwise noted.