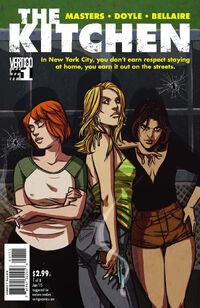 The Kitchen (Volume 1) was a limited series, published by Vertigo in 2015. It was written by Ollie Masters with art by Ming Doyle. It tells the story of three mob wives in 1970s Hell's Kitchen who become engrossed in the world of crime themselves.

Back to Comics Contents : Comics T : The Kitchen Vol 1

Retrieved from "https://dc.fandom.com/wiki/The_Kitchen_Vol_1?oldid=2399613"
Community content is available under CC-BY-SA unless otherwise noted.