The Legend of Wonder Woman (Volume 1) 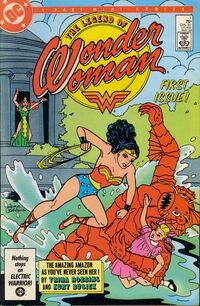 The Legend of Wonder Woman was a four-issue limited series published from May to September of 1986. The series was written by Kurt Busiek with artwork by Trina Robbins. The series was patterned in the style of the Golden Age, but was not considered to be a flashback to Earth-Two—it was a new, contemporary Wonder Woman with a Golden Age aesthetic.

The Crisis on Infinite Earths: The Compendium (2005) places these stories on Earth-Forty (with the Earth-Two Wonder Woman having similar adventures), whilst Essential Wonder Woman Encyclopedia (2010) places them on Earth-One. This may mean that these stories (with slight variations) occurred on all three Earths.

Back to Comics Contents : Comics T : The Legend of Wonder Woman Vol 1

Retrieved from "https://dc.fandom.com/wiki/The_Legend_of_Wonder_Woman_Vol_1?oldid=2102392"
Community content is available under CC-BY-SA unless otherwise noted.