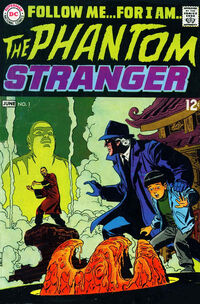 The Phantom Stranger (Volume 2) was published from June of 1969 to February of 1976 spanning a total of 41 issues. The series featured regular guest appearances by Dr. 13, Deadman, the Spawn of Frankenstein and Black Orchid. In 2010 a 42nd issue was issued as part of the Blackest Night event.

Back to Comics Contents : Comics T : The Phantom Stranger Vol 2

Retrieved from "https://dc.fandom.com/wiki/The_Phantom_Stranger_Vol_2?oldid=2226312"
Community content is available under CC-BY-SA unless otherwise noted.