The Power of Shazam! (Volume 1) 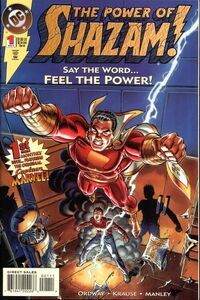 The Power of Shazam! re-introduced the character of Captain Marvel and his supporting cast in the DC Universe for the second time since the Crisis on Infinite Earths. Ignoring the 1987 limited series reboot Shazam!: The New Beginning, this title spun-off from the The Power of Shazam! graphic novel providing new origins for Captain Marvel, as well as his classic foes, Doctor Sivana and Black Adam.

Issue #48 was released in 2010 as part of the Blackest Night event.

Back to Comics Contents : Comics T : The Power of Shazam! Vol 1

Retrieved from "https://dc.fandom.com/wiki/The_Power_of_Shazam!_Vol_1?oldid=2243223"
Community content is available under CC-BY-SA unless otherwise noted.