Thom Kallor of Xanthu was Star Boy of the Legion of Super-Heroes. He was born with the superhuman ability to temporarily increase the mass of an object, up to the mass of a star. Becoming adrift in time and space, he became the Starman in Kingdom Come, and then moved to the early 21st Century and joined the Justice Society of America. This all had a deteriorating effect on his sanity.

He was born on an observatory satellite orbiting the planet Xanthu, to astronomer parents. He originally gained Kryptonian-level powers like those of Superman when he was caught in the tail of a comet, but in time those faded, leaving only his original density power. He was expelled from the Legion for killing his girlfriend Dream Girl's ex-boyfriend, Kenz Nuhor, in self-defense, thus breaking the Legion's non-killing rule. After this he and Dream Girl joined the Legion of Substitute Heroes for a time before returning to the Legion. Star Boy originally wore a purple uniform with a white cape and a five-pointed yellow star on his chest, but his best known costume was a full-body star field suit. 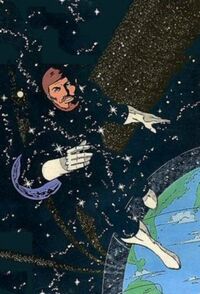 Thom Kallor has revealed himself to be the new Starman in the Justice Society of America.[1]. At some stage he traveled to Earth-22 where he helped Superman reform the Justice League and incarcerate all the metahumans who did not want to conform, in the Gulag. He must have left before the majority of the metahumans were killed in the UN nuclear bombing.

Kallor claims to hear voices in his head, and has been diagnosed as a borderline schizophrenic. When not performing his superhero duties, he resides at the Sunshine Sanitarium (a mental hospital) and takes medications for his illness (both voluntarily); his favorite day at the hospital is Wednesday, as that is the day sloppy joes are served. It is revealed that his schizophrenia was brought about soon after he acquired his abilities, which resulted in his spending several years in a mental asylum. His condition was brought under control with 31st-century technology and medication in the present day (which Dream Girl views as barbaric), failed to keep it in check.

In The Lightning Saga crossover, Starman and Karate Kid are two of the seven Legionnaires stranded in the 21st century. Starman says the name "Lightning Lad" (written in Interlac) to Karate Kid, causing him to faint. Later in the same issue Starman also says his "Dream Girl" is at Arkham Asylum.

A team composed of Batman, Sandman, Geo-Force and Starman travel to Arkham Asylum. There, Starman finds Dream Girl being used as a weapon by Doctor Destiny. He uses her abilities to create a copy of Kenz Nuhor as a zombie out of Starman's mind. As he begs Destiny to let Dream Girl go, Starman says the "wake-up" word in Interlac to awaken Dream Girl from her trance. When she subdues Destiny, the two embrace, only for Dream Girl to reveal that because he saved her, one of them is going to die. After several other lost Legionnaires (Wildfire, Timber Wolf and Dawnstar) are found, they reveal that their plan is to bring someone back from the dead using handheld lightning rods, but at the cost of one of their lives.

The six Legionnaires then head to Suicide Swamp where they find a former hideout of the Secret Society, which is hiding the seventh Legionnaire, Sensor Girl. She replays the Legionnaires' first battle with Computo, in which one of Triplicate Girl's duplicates was killed. After Dawnstar awakens Sensor Girl, they distract the League and the Society by playing out the illusion, until Superman and Power Girl use their X-ray vision and see through the illusions.

The Legionnaires then split up and head to several different locations on Earth, which Batman and Green Lantern realize are places where the Speed Force was active at some point in history. A lightning bolt strikes and narrowly misses Karate Kid. The six Legionnaires then disappear, except for Starman, who takes off his flight ring. The lightning bolt returns Wally West, his wife and twin children to Earth.

At the Fortress of Solitude, the Legionnaires, except for Karate Kid and Starman, return to the 31st century. The Legionnaires make contact with Brainiac 5, who comments that Wally's return was a freak accident, but that they found who they were looking for.

The god-like Gog restores Thom's sanity, something Thom believes is a bad thing. Now he has full knowledge and understanding of his mission and wonders if he'll have the courage to go through with it. During a battle with the Justice Society Infinity of Earth-2, it is revealed that his star field suit was designed by three Brainiac 5's and in actuality is a map of the recreated multiverse. He later tells Mr. Terrific of the danger of being sane and that now he must carry out his mission in order to save his timeline.

When the rebellious half of the JSA shows up to tell the other half what Gog is doing to the planet, a battle ensues. For the JSA's defying of Gog and his will, he undoes all the "miracles" he has done for them, thus returning Starman's Schizophrenia.

Retrieved from "https://dc.fandom.com/wiki/Thom_Kallor_(Pre-Zero_Hour)?oldid=2807088"
Community content is available under CC-BY-SA unless otherwise noted.