Ah, the thrill of the hunt -- there's no feeling in the world like it!

Thomas Blake is Cat-Man, a former super-criminal and enemy of Batman, who had somewhat reformed and turned his efforts for good instead of evil.

Despite still upholding poor regard for the law, Cat-Man has become an anti-hero for his intermittent code of honor.

Thomas Blake was a former wealthy socialite from Gotham City who trained himself to become a professional jungle cats hunter. His dedication to this hobby caused him to squander his fortune and without any resources, he decided to turn to crime. At first, he considered becoming a vigilante, but since Batman was already working in Gotham, Blake decided to adopt the identity of the costumed criminal, Cat-Man. Blake was partially inspired by the animals he had devoted his life to capture and the notorious former criminal, Catwoman, who had retired from crime. As Cat-Man, Blake started a criminal spree and often stole cat-themed items, like valuable cat statues. Batman and Robin eventually deduced Blake's secret identity thanks to Batwoman, who had confronted Cat-Man moments later. Cat-Man tried to fight the Dynamic Duo using a giant cat robot, but the heroes destroyed the machine and just as Cat-Man tried to escape, he was carried away by a nearby river, after which he was presumed dead.[1] 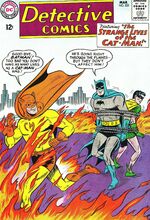 Cat-Man soon returned to Gotham with a new criminal plan. During this time, he managed to recruit Batwoman and Blake provided her with a Cat-Woman costume, which resembled his own Cat-Man outfit. However, this was a mistake on Blake's part, as Batwoman led Batman and Robin to his hideout and he was forced to retreat on a boat, which crashed on the sea, apparently killing him.[2]

It was later revealed that the reason why Cat-Man managed to survive those deadly accidents was because part of his Cat-suit was made of a magical cloth that granted the wearer nine lives, just like a cat. When Cat-Man learned of this, he used it to his advantage, escaping from Batman and Robin by exposing his life. However, it was Batwoman who deduced Cat-Man's plan and she used her own Cat-Woman costume in order to stop the Cat-Man. Blake was finally arrested and taken to prison.[3]

Several years later, Catman returned to Gotham and initially, Catwoman was blamed for his crimes. The truth was eventually discovered by Catwoman and Batman, who tracked down Catman to his lair.[4] Catman used a deadly trap to eliminate them while he travelled to Greece to sell the stolen goods in return for his own private island, which he planned to turn into a criminal haven/retreat. His plans were foiled by Batman and Catwoman, who tracked him down and caused his apparent demise in the ensuing confrontation. Although, because of the magical properties of his suit, Catman survived.[5] Seeking revenge against Batman and Catwoman, Catman returned to Gotham and tried to retrieve the missing part of his costume to restore his scarred face. Although he managed to capture Catwoman and retrieved his costume, he was defeated by Batman and Blake learned that his magical costume didn't work anymore.[6]

Thomas Blake's origin remained mostly unchanged after the Crisis on Infinite Earths altered reality and continuity. In his childhood, Thomas and his mother were abandoned by Thomas' father. Being left in poverty led his mother to abuse him verbally and physically. Eventually, the abuse made him internalize that he was evil and made him develop a hatred for women.[7] Although Catman began his criminal career as just a cat-themed version of Batman, his gimmicks were mostly considered laughable by the general community and he was never taken seriously.

Later on after a long absence, Catman resurfaced when his pet tiger escaped and started killing people in Gotham. Although Catman tried to take the tiger back, he took the chance to confront Batman, forcing him to fight the animal. Batman managed to capture the tiger and Catman was attacked by Catwoman, who sought to clear her name after she was blamed for Catman's crimes. Despite his utter defeat, Catman was not captured.[8]

He would usually spend time in Blackgate Penitentiary.[citation needed] Eventually, Blake left the villain game and became a couch potato. After several particularly humiliating run-ins with Green Arrow, however; he decided to shape up again. Recently, he has decided to return to his old community after many years of training in Africa. He is also no longer exclusively a villain, working with both heroes and villains as an on-and-off member of the Secret Six.

In 1993, Catman as a member of the short-lived team "The Misfits", led by Killer Moth. The Misfits were a group of third-rate villains trying to prove themselves by working as a collective, but were naturally defeated by Batman and Robin.[9] Catman would later come into contact with Catwoman again, when it was revealed the cloth his suit was made from actually belonged to a South Sea cat cult. Catwoman was hired by the cult to return the cloth, but ended up giving them a fake.[citation needed]

Catman remained in limbo until around 2003, when he resurfaced as a minor foe of Green Arrow (Oliver Queen). It was shown that Catman had become a pathetic, overweight loser, looked down upon by other villains and defeated by Green Arrow without any real effort. His hair had been dyed black, which he thought "made [him] look tougher," and not only was he still hitting his girlfriends, but he apparently wore his old costume under his regular clothes. At one point, over an old grudge, Monsieur Mallah sent Warp to abduct Blake, the implication being that he had met a rather grisly end as Mallah's dinner.[10] Blake alluded to this during the events of Villains United: "You know you've hit rock bottom when a monkey and a Frenchman don't consider you worth killing." Later, when he met Monsieur Mallah again, he commented that he had no desire to see the gorilla's stomach again.

During the events of "Villains United," Catman resurfaced it was revealed that actually Catman had gone back to his roots in an attempt to remake himself as a man. After a failed attempt at suicide, he returned to Africa and began living with a pride of lions. He lost weight, and regained his sense of self-worth and fighting skills, becoming even more than the warrior he had previously been. This "perfect existence" however, would be shattered by the arrival of recruiters from the Secret Society of Super-Villains, who were attempting to unite all of Earth's super-villains under their control. Catman was one of the very few villains who refused, and as it was embarrassing to have a "nobody" like Catman refuse them, they slaughtered his entire family of lions. It was later revealed that although Catman had thought Deathstroke the Terminator had done the job (under orders from the faux Lex Luthor), it had actually been Deadshot under orders from Mockingbird to coerce Catman into joining his team.

Catman vowed revenge against The Society, and was subsequently recruited into the Secret Six. Together, the Secret Six waged war against The Society under the direction of "Mockingbird" (who would later be revealed to be the actual Alexander Luthor). When he found out it had been Deadshot who had performed the hit on his pride, he was furious. But Deadshot would later apologize, and Catman forgave him. Although the two were reluctant allies at first, they soon bonded and became what one could loosely call friends. He would also undergo a carnal relationship with fellow Secret Six member Cheshire. She would later betray him and the rest of the Six to the Secret Society though, and it was revealed she had tricked Blake into helping her conceive a child; Mockingbird was holding her hostage, and she believed Blake to be a nearly perfect specimen of man.[11] During the Battle of Metropolis, after leaving Mockingbird's control, the Secret Six decided to strike out on their own as neither villains nor heroes, but rather mercenaries.

During the events of "Birds of Prey: Dead of Winter," the Secret Six ran into the Birds of Prey. Blake and the Huntress - out of costume, danced together while incognito, with hints of an attraction. The two teams battled, six on six, and Catman paired against Huntress, who hinted that she might have been interested in a relationship if he drew the line between villain and hero a little bit more carefully. The fray ended with the resurrection of former JLI member Ice. The Secret Six broke up at the end of this adventure.[12]

Catman was next seen on the Hell Planet with the rest of the villains deported during the events of "Salvation Run,"[13] along with fellow Secret Six members Deadshot, Rag Doll and Scandal.

After returning to Earth, Catman rejoined the Secret Six. Catman joined Bane and Ragdoll on a mission to stop criminals in Gotham City after Batman's death. Catman and Bane had a discussion about their suitable positions to take place as Gotham's vigilantes. Their hopes, however, were crushed when Nightwing banished them from Gotham and they decided to move on as the Secret Six.[14]

Retrieved from "https://dc.fandom.com/wiki/Thomas_Blake_(New_Earth)?oldid=2778022"
Community content is available under CC-BY-SA unless otherwise noted.