Thorn is an alter-ego used by two women in the DC Universe, both of whom suffered from multiple personality disorder and created the violent, destructive personality of Thorn. The first, Rose Canton, was a villain of the Flash and Green Lantern. She had a relationship with the original Green Lantern, Alan Scott, and was the mother of his children, superheroes Jade and Obsidian. Her successor, Rose Forrest, operates in Metropolis and frequently clashes with Superman. 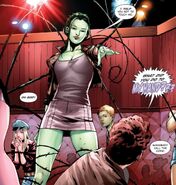