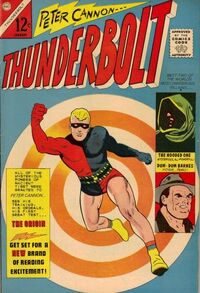 This volume is technically two volumes. Thunderbolt #1 was a one-shot. When it sold well, Thunderbolt got his own ongoing series, which began with issue #51 because it took over numbering from the Son of Vulcan series.

Retrieved from "https://dc.fandom.com/wiki/Thunderbolt_Vol_1?oldid=2259839"
Community content is available under CC-BY-SA unless otherwise noted.